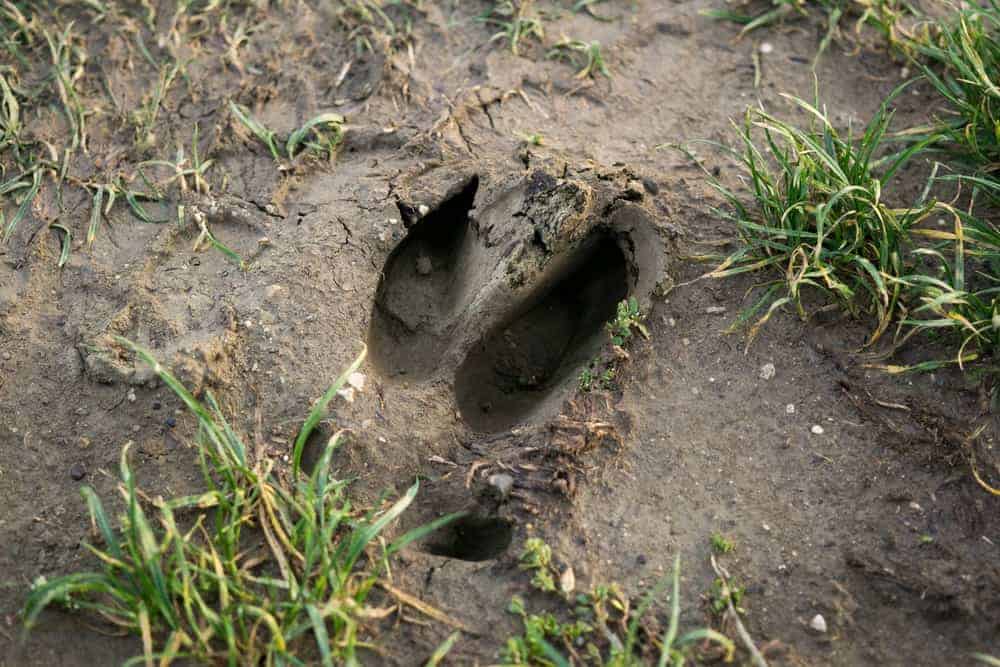 To find animals in the wild, trackers use a variety of tracking techniques. I learned a few of these during my zoology degree, which I would love to share with you today. All are applicable for tracking wildlife, and some apply to tracking pets or livestock as well.

Animals can be tracked through the tracks, signs, and trails they leave, known as spoor. They can also be tracked by technological means, such as radio collars, microchips, satellite tracking technology, and aerial observation from drones or aircraft.

There are many different ways of tracking animals, and the specific means selected will depend on what sort of animals you are tracking and the reason you need to track them.

Everyone immediately thinks of the type of tracking when the words “animal tracking techniques” are mentioned the most ancient, dating back thousands of years. This is the art of following animals by the signs that they leave.

These signs are collectively known as spoor and include their tracks, droppings, hair or feathers, etc. A skilled tracker can identify animals from their spoor and determine which direction they are traveling in and a lot of other information.

However, this form of tracking requires a lot of knowledge and experience. You also have to get very close to the wildlife, which can be dangerous.

In the interest of making animal tracking easier, scientists have developed various alternatives to tracking by spoor. These include tagging and recapture, where you capture an animal and tag it in some way, with a ring around its leg (in the case of birds), or by a tag in its ear (commonly used for livestock), or a microchip injected under the skin.

However, tagging and recapture do not allow you to find out where an animal has been between when you first caught it and when it was recaptured. It has practical applications for keeping track of who owns livestock and for identifying lost pets.

However, something more powerful was needed to track animal migrations to find the precise routes followed by animals.

One way to see exactly where animals are and where they are going is by tracking them from the air. This can be done from manned aircraft, unmanned aircraft, or radio-controlled drones. This method works great for large animals on land in open areas. However, small animals can’t be easily seen from the air.

What’s more, animals that live underwater or in forested areas can’t be tracked visually from the air.

For such creatures, alternative technologies had to be found. Radio telemetry involves putting a collar onto the animal that you want to track. The collar contains a radio transmitter. You can then follow the signal with a handheld radio antenna and zero in on the signal.

Radio telemetry has certain limitations, though. For example, you can’t use it to track marine animals or flying animals. For these reasons, satellite tracking has been developed. The signal isn’t sent to a land-based receiver in this form of radio tracking but a satellite. This allows animals to be tracked over much greater distances than is possible with conventional radio telemetry.

More recently, GPS tracking has been developed. This is similar to satellite tracking, but it sports a receiver instead of the animal wearing a transmitter. Because receivers are smaller and use less power, they last longer and can be placed on smaller animals. Some are small enough to attach to birds.

What’s Involved With Tracking By Spoor?

Tracking by spoor is what you would use if you were tracking an animal to hunt it or capture it for the first time. You rely on information the spoor can give you to determine what type of animal you are tracking and which direction it is traveling in.

Droppings, technically known as scat, provide a lot of information by color, consistency, and content. For example, tight little green bundles full of grass belong to herbivores. Those bundles’ exact size and shape will give you clues as to the exact species, whether it’s a deer or a rabbit, for example.

Tracks also provide a lot of information. Deer and buffalo leave hoof marks, whereas predators leave paw prints. Looking to see whether the paw prints have any claw marks in front of them will tell you whether you are dealing with a cat species (no claw marks) or something like a wolf, coyote, or bear (claw marks).

The direction that the tracks are pointing in tells you which direction the animals are traveling in, and the more definite the edges of the track, the more recent the track is.

The Applications Of Tagging And Recapture

Tagging and recapture are still widely used to track bird migrations, with little colored bands on birds’ legs. When the birds are recaptured, information etched onto the bands can be read to determine where the birds were first tagged and on what date, among other information.

Tagging and recapture is also the standard method of tracking livestock. Cattle and sheep will have tags inserted in their ears with information about them and their owners. In some places, famously the old West, livestock were branded. Anyone who could read what the brand meant could work out where the livestock had come from.

In modern times, animals are often tagged with microchips injected under the skin. These can contain far more information than the more old-fashioned forms of tagging and are often used by pet owners to ensure that their pets can be identified if they go missing.

When Would You Use Visual Tracking From The Air?

It is also used in wildlife tracking for large and dangerous species such as polar bears and buffalo. These animals can most efficiently and safely be found from the air.

Although one could find buffalo droppings in the prairies, or polar bear droppings on the ice, their tracks do not show up in many places in these habitats. Tracking these animals has always been based on sight, and getting altitude makes the business a lot safer and more efficient.

The Applications Of Tracking With Technology

Tracking with technology has allowed us to gather much more data than previously possible with tag and recapture methods. It also allows people who do not have the skills to track by spoor to monitor animals in need of monitoring.

VHF (very high frequency) radio tracking relies on the transmission of radio signals. Scientists capture an animal, sedate it, and place a radio transmitter on it. This used to be in the form of a collar, but recent improvements have seen transmitters that can be embedded under animals’ skin.

The transmitter sends a signal to the radio antenna and receiver. It can then be tracked on foot, from a vehicle, or by an airplane. A limitation is that you have to be within a certain range to pick up the signal.

This method allows tracking animals such as wolves throughout their ranges, and data such as how much pack ranges overlap can be built up.

Satellite tracking is similar to radio tracking, except that instead of sending the signal to a radio satellite and receiver, it sends it to a satellite. The signal is then beamed from the satellite to a receiver at the scientists’ base of operations.

This tracking method allows scientists to study the movements of animals from much further away than radio tracking, making tracking of migrations of animals such as whales possible.

GPS tracking is the latest tracking technology. It is a refinement of satellite tracking that places a receiver on the animal being studied. The receiver uses the information beamed from the satellite to calculate the animal’s position and movement. This technology allows smaller animals, such as birds, to be tracked in real time.

Why Do We Track Wildlife?

By analyzing data from tracking wildlife, scientists can learn how to conserve endangered animals and control problematic wildlife populations and collect data about wildlife movement patterns such as migration.

Is There An App To Identify Animal Tracks?

There is an Android app to identify animal tracks, known as CritterTrax. The app iNaturalist, available for Android and iOS, will identify scat among many other uses.

There are many ways of tracking an animal. The most ancient form of tracking by spoor takes a lot of skill and experience. Other methods of tracking have their applications but also their limitations. Selecting which one to use will depend on your particular needs.