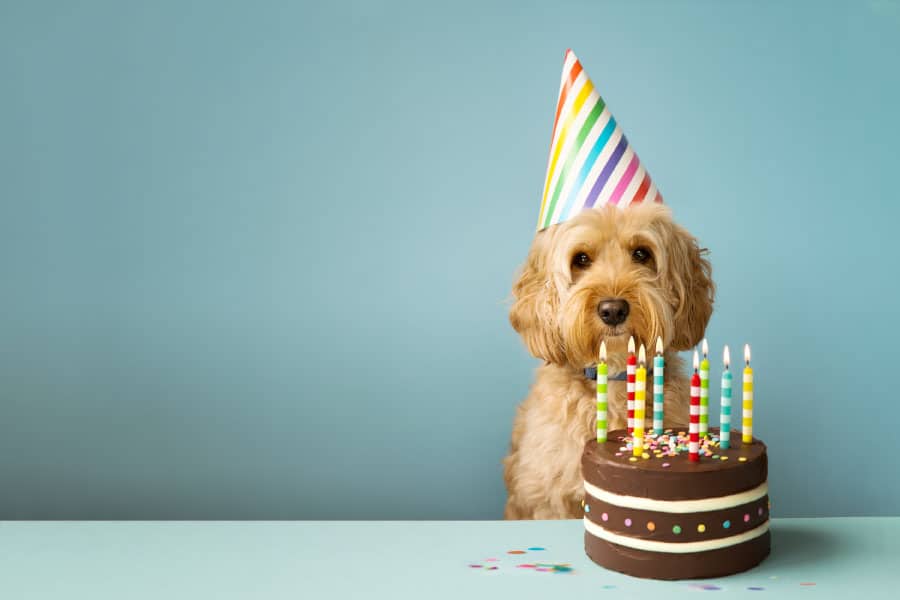 Yikes! The dog has chewed up the Christmas presents under the tree, including Aunt Annie’s large box of chocolates! The urgent questions become: are dogs allergic to chocolate? Is it bad for them? What should I do?

Our dogs often end up eating things they shouldn’t, and one of the commonest is chocolate. Some people even give their dogs chocolate as a treat, assuming that it must be safe for the dog if they can eat it. The reality is that what is good for people is not always good for dogs. Chocolate would definitely be on the ‘forbidden’ list for dogs. So back to the question; are dogs allergic to chocolate?

This is an important question for pet owners as chocolate is commonly found in our homes – especially at holiday times. We all want to do the best for our dogs, and it is crucial to know what common household items are harmful to our pets.

What Is An Allergy?

An allergy is specific to an individual. It is that individual’s response to a substance where the immune system overreacts and identifies the substance as harmful and begins to attack it.

The substance producing the allergy is known as an allergen. The substance is generally not harmful even though that individual’s body perceives it as harmful.

In the case of an allergy, the immune system may be so over-reactive that it causes anaphylaxis, which can kill without immediate intervention.

This is not, however, the normal reaction to a dog eating chocolate.

Is Chocolate Bad For Dogs?

The chemical composition of chocolate includes a substance known as theobromine, which cannot be metabolized by dogs. In humans, theobromine has many health benefits and may be used medicinally as a cardiac stimulant, vasodilator, smooth muscle relaxant, and diuretic.

Despite the manifold benefits for humans, theobromine is most definitely not beneficial for dogs. The inability to metabolize theobromine results in overdose symptoms manifesting in dogs.

Dogs may develop a positive cyclical feedback loop when chocolate is ingested, and the body cannot efficiently excrete the theobromine. The theobromine is deposited in the bladder, where poor absorption and excretion rates result in reabsorption occurring and amplification of the physiological effects of the chocolate’s toxicity.

The reabsorption rate may result in toxic symptoms developing many hours after ingestion – usually when the vet is closed!

Is All Chocolate Equally As Bad?

Milk chocolate with lower levels of theobromine would not result in as severe a reaction, depending of course, on the amount ingested and the size of the dog.

White chocolate has very low levels of theobromine and typically does not usually show any reaction, although the dog may still vomit from the high fat and sugar content of the white chocolate.

Symptoms Of Chocolate Poisoning In Dogs

The dog may also experience increased thirst and urination. Older dogs with a pre-existing heart condition may be at risk of sudden death due to a heart attack resulting from the cardiac strain. Ingestion of large amounts will also result in neurological symptoms – muscle tremors and seizures.

What To Do If Your Dog Has Eaten Chocolate

Dogs who have ingested chocolate should be induced to vomit within the first hour following ingestion. This can normally be achieved by one of two methods. The first method requires forcing the dog to swallow a ball of slightly moistened, powdered washing soap.

The second method necessitates syringing a solution of 30% hydrogen peroxide into the dog’s mouth. A good guideline to follow when administering hydrogen peroxide dosing is 5ml for every 5kg of body weight, which is then carefully given to the dog, ensuring you do not squirt any down into the lungs.

The safest method of giving any liquid in a syringe is to introduce a small amount into the dog’s cheek and hold the mouth closed so that it can be swallowed independently by the dog. It is crucial to note that if the dog is already vomiting, has a heart condition, or is having seizures, do not give anything to induce vomiting.

Brachycephalic dogs ( dogs with short noses like pug and bulldogs) should not be made to vomit at home as they are at risk of aspirating, and it is much safer for this to be done at a vet’s practice.

Aspiration occurs when ingested fluid is misdirected into the lungs instead of the stomach. After the dog had vomited or even if the dog does not vomit or you are not sure when the illegal chocolate consumption occurred, then administer activated charcoal ( 1-5g/kg of the dog’s body weight).

Activated charcoal is available at most pharmacies and should form part of your pet’s first aid kit. The next step should be to take your dog to the vet as quickly as possible. The vet will need to assess the dog and decide on further treatment.

This may include IV fluids, cardiac medication, and various other medication which the vet may deem necessary. Administration of activated charcoal every four to six hours for the first twenty-four hours should be considered to prevent reabsorption.

What Chocolate Type Treats Are Safe For My Dog?

Carob is an ingredient that is similar to chocolate but does not contain any theobromine or caffeine, so it does not have any of the harmful effects of chocolate. This is the ingredient that you will most commonly find in chocolate-flavored dog treats.

Yogurt covered treats are tasty and a useful means of giving your dog probiotics, which assist the gut with digestion.

Fruit and vegetables to avoid would be avocados, cherries, tomatoes, and onions. Cancer has fast become the worldwide leading cause of death in dogs. Recent studies have shown that adding vegetables to your dog’s diet regularly significantly reduces the risk of your dog developing cancer.

Artificial sweetener free peanut butter is a firm favorite with most dogs, and unsalted, unbuttered popcorn is a good low-calorie treat for dogs – humans too, so you can share!

The internet is full of healthy, flavorful recipes for treats that you can bake for dogs if you like cooking, and it gives you the opportunity to take your dog’s particular needs and preferences into account.

Dogs are not generally allergic to chocolate, but it is, however poisonous for dogs and should be kept in safe storage areas where it is inaccessible to them. Dark chocolate is more poisonous than milk chocolate, but the size of the dog and the amount the dog eats play a role in determining how sick the dog will become.

Any ingestion of chocolate requires immediate intervention, and dogs should be taken to consult a veterinarian for a full assessment. Dogs do not crave chocolates the way humans do, and there are many alternative healthy treats that can be given to dogs.