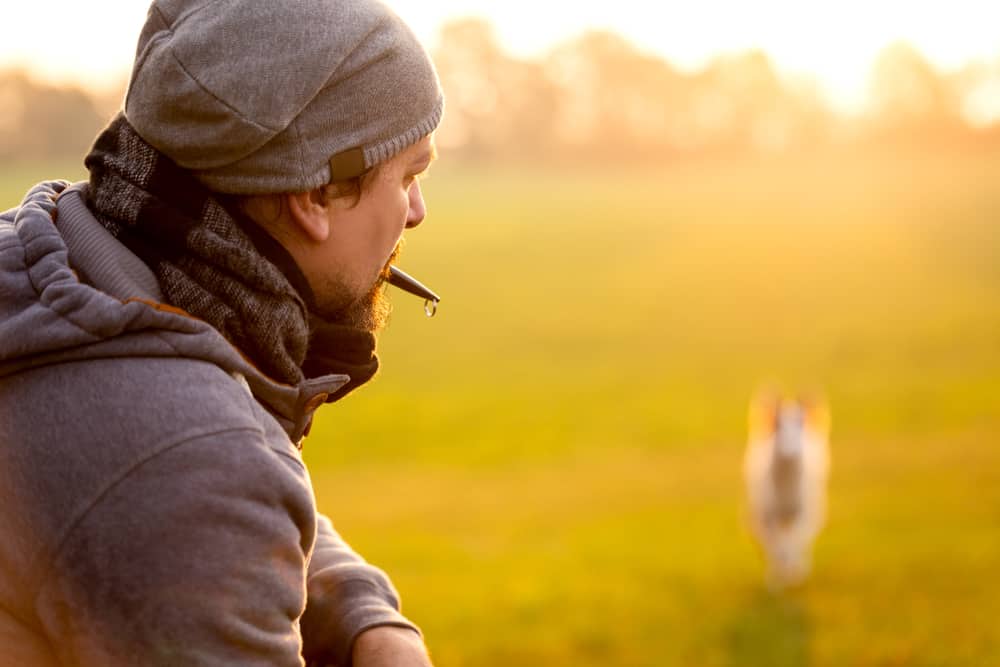 Dog whistles are handy tools used in many households to communicate with and train our furry friends. However, the question arises, are these whistles harmful to birds? Can the sounds they emit harm bird populations both in the house and in the wild?

Birds can’t hear the frequencies emitted by dog whistles and would not be harmed by one. The average frequency of a dog whistle is between 23 to 54 kilohertz (kHz), although some are as low as 20 kHz. Typically birds can hear between 1-5 kHz, with no documented records of them hearing above 20 kHz.

It’s a relief to know that these whistles do not hurt birds, but at the same time, it’s always good to know the whole story. Like which species of birds might be able to hear up to 20 kHz, and how many other animals out there could these whistles affect?

Can a dog whistle hurt birds?

A standard dog whistle hits an average frequency of 23 – 54 kHz. These sound levels are perfect for dog hearing as dogs can hear sounds emitted up to 40 – 60 kHz. You can adjust some of these whistles to a lower frequency, but none of them go lower than 20 kHz, and it is generally not the norm for them to go this low.

On the other hand, birds typically hear their best between 1 – 5 kHz, with records showing an average hearing of between 0.5 – 8 kHz. Of course, there is a vast variation between species, and there are even records showing that some species of songbirds can hear up to 20 kHz.

There have been differing results in studies of upper-level bird hearing, but there have been no recent recordings of birds hearing above 20 kHz. Even birds that use sounds for echolocation in dark environments such as caves, like swiftlets and oilbirds, use sounds recorded between 1 and 15 kHz.

If you had to take a look at a sample of common wild birds or those commonly kept as pets, you would see that the average frequency levels mentioned above fit in with their approximate ranges:

The information in the table verifies that it is not common for birds to hear frequencies close to those emitted from a dog whistle. These studies show that birds such as Pigeons, Owls, Budgies, Cockatiels, and even the American Crow would not be able to hear the frequencies emitted by the dog whistle and will therefore not be harmed by one if used in their vicinity.

All of this information points to the fact that ultrasonic devices which use frequencies between 15 – 30 kHz would not be harmful to your typical bird, and not many species except for a few songbirds would even be able to pick up on those frequencies.

Dogs’ whistles are also known as Galton’s whistle or silent whistle. This whistle emits ultrasonic sound waves that most humans and animals cannot hear. Sir Francis Galton invented them in 1876 to test the range of frequencies heard by dogs, cats, and humans.

Today these whistles are often used during dog communication and training and are often incorporated into an everyday routine between dog owners and their lovable, furry friends. They are pretty popular because the noise made by these whistles is quiet and comes across as a hissing sound. They are seen as a ‘silent’ way of training and communicating with your pet without disturbing the people around you.

Even initially, dog whistles did not pose a problem for the nearby birds. Their frequency output makes them safe to use in the company of your household pet birds and even in the park or out in nature, as the birds in your company will not be able to hear the sounds emitted from these devices.

What other animals could be affected by a dog whistle?

Now that we have ascertained the effect of a dog whistle on the local birds, it makes one wonder which other animals might be hurt or affected by this training tool. It might be handy first to look at the hearing frequency of other animals that might come into contact with a dog whistle.

The information in this table shows us that a few other animals could pick up on the ultrasonic frequencies released by the dog whistle. Let’s delve deeper into the effects on each animal.

While using your whistle, you should never blow it close to your dogs’ ears or blow on it for an extended period in their presence, as the noise output could cause damage to your dog or cause them unnecessary pain.

Like dogs, if you misuse a dog whistle around cats, it could have harmful effects. Cats can hear both lower and higher frequencies better than dogs, and due to this, you should be on the lookout for how your cats respond to the whistle.

Overall, studies have shown that high-frequency sounds can upset horses, cows, and sheep. When using dog whistles in the vicinity of these animals, you might want to keep this in mind as they will be able to pick up on the lower end of the dog whistle frequency.

Rabbits will be able to hear the lower range frequencies of the dog whistle just like horses, cows, and sheep, and therefore one should be aware of this when using the whistle around them.

On the other hand, rats and mice have excellent hearing just like cats and will pick up on the full range of the dog whistles frequencies. Due to this, it would be best if you didn’t use your whistle anywhere near your friendly household pet rat or mouse as this noise will frighten them.

In conclusion, studies have shown that birds can hear between 0.5 and 8 kHz on average. The highest known record of a bird’s hearing which belonged to a songbird species was 20 kHz. Your standard dog-whistle hits a frequency of between 20 kHz and 54 kHz.

This data shows that dog whistles are not harmful to birds as most species of birds will not even be able to hear the frequency output of the whistle. Therefore, you can rest assured that if you use your dog whistle near birds, you will not be harming them in any way.