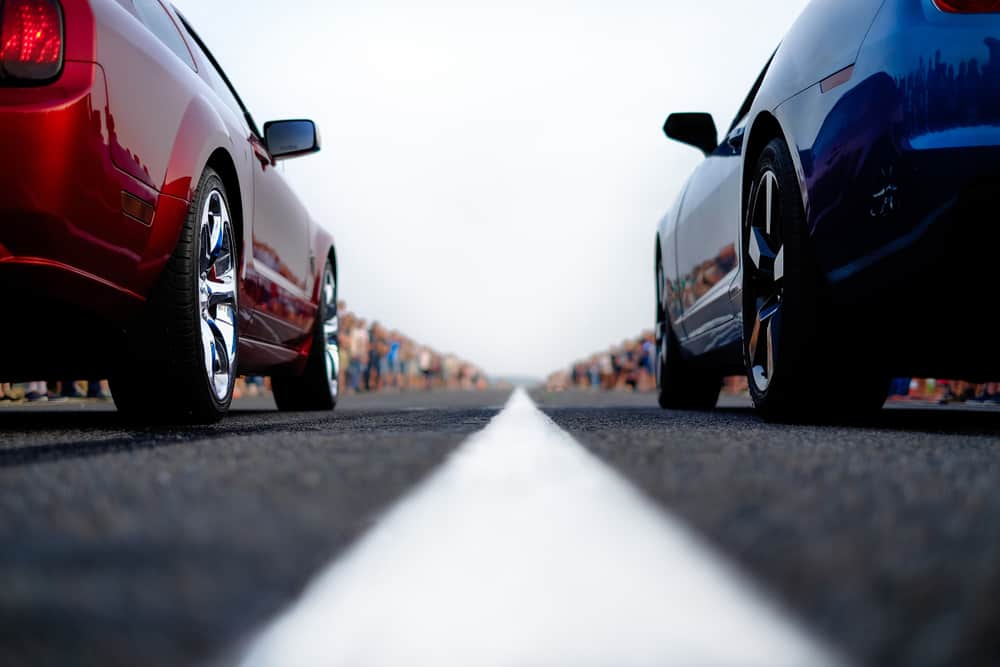 New age drag strips are purposed built facilities, consisting of a vast network of establishments. They house everything from F&B outlets, retail stores, medical rooms, and mechanical workshops. So how much land do you need for a drag strip?

A standard drag race runs along 402m of road with a run-off area that follows. 700m of run-off is required as a safe distance for the vehicle to stop. The total track length should be around 1202m. The width of two parallel lanes needs to be 20m. A square mile of land is sufficient to house the track and other facilities required to make up the racecourse.

In a general sense, a drag strip could be developed on a square mile of land. To be more specific, we have to consider the list of requirements that make up the preliminary necessities of drag racing.

Modern-day drag strips are full-on business establishments comprising of many consumer facilities. In addition to the array of venture facilities, seating and viewing areas make up a considerable part of the infrastructure.

Drag racing is a spectator-filled sport that draws massive crowds of all age groups, keeping the grandstands full of cheer. These grandstands take on pyramid type seating structure, often found on the main straights of popular racing circuits around the world. These highly developed drag strips often encompass areas or spaces that cater to other forms of motorsport like drift as spin arenas, go-kart tracks, and even motor cross dedicated tracks.

The electronic systems that keep the IT, lighting, and communication systems functioning are also a major part of the track infrastructure. Officials, marshals, paramedics, and pit crew have to maintain a seamless communication method from any part of the raceway. The timing systems also play a crucial part in assessing and measuring the driver’s reaction & exit times, and exit speed. It is also used to tally overall scores and points on the day.

Watchtowers and office spaces are also part of the infrastructure. Often, a watchtower is constructed in line with the drag strip, which officials utilize to scrutinize race starts and finishes. Medical rooms and mechanical workshops are standard within the drag strip sphere.

Advertising and brand management for companies are well availed at drag strips. The display spaces provide a very viable opportunity for companies to place their brands, often through sponsorship. This assists track owners to maintain the upkeep of the infrastructure and meet running costs.

How long is a drag strip?

The former and most popular length (1/4mi) requires around 700m (0.44mi), which is regarded as a safe distance for the vehicle to brake and be brought to a complete stop. This would then constitute that the required track length is around 1200m or 0.75mi from beginning to end.

There are instances where drag strips are also used to measure a standing kilometer top speed run. These tracks would often have longer run-off areas or greater allowance in the distance from the one-kilometer speed trap to the area where the vehicle can be brought to a complete stop safely.

How wide is a drag strip?

As typical drag races are conducted by racing two vehicles next to each other, two parallel lanes are required. These two lanes’ width needs to be adequate to house these vehicles sufficiently apart, allowing them to race down their lane with no obstruction from the competitor’s car. 60ft or around 20m would be regarded as an acceptable width for the two lanes, from side to side.

Another key feature that would constitute the width is the outer lanes, which are generally on either side of the drag strip. These lanes, commonly referred to as return lanes, run parallel to the actual drag strip.

They allow for the vehicle which has completed its race to turn into and return toward the start area or pit areas. These are generally a single lane on which the car must maintain a minimum, safe speed when returning.

They are also utilized by the recovery vehicles, tow trucks, or flatbeds, which are often required to bring back a car that may have been damaged or incapacitated after its race and has lost drivability.

What makes up the drag strip surface?

The track surface is primarily made up of asphalt or cement. It is known that on some sanctioned tracks, the first 660ft are surfaced with cement and then transitioned into asphalt. This said, the surfaces are often prepped with rubbery or glue types of material, allowing for a stickier surface, enabling better traction.

The staging or beginning area of the track has an allowance for water to be laid down when the vehicles need to perform a burnout. The pre-staging surface is also prepared with a very sticky substance, commonly known as “track-bite.” This is often sprayed onto the surface by the pit crew of the competitor’s race team.

Some facilities are beginning to adopt new surface technology, which is made up of a rubber-type material, similar to that found on warehouse floors. This, however, has not yet been approved or adopted by motorsport sanctioned facilities.

Where can I open a drag strip?

Dependent on the area in which one would be interested in establishing a raceway, different legal restrictions would apply. There are zoning laws to be considered, especially in more densely populated areas.

Popular locations would be abandoned airstrips, unutilized shipping or container warehouse facilities, or even desert areas. The cost would obviously be significantly impacted if one were to choose the latter, for example, as it would require an entirely new infrastructure

It could be advisable to get government involvement, reducing individual investor costs, and working on a lease-type agreement. Zoning restrictions will definitely apply if there are residential properties, even as far as a mile away from the desired location. In such cases, one might have to approach residential property owners and seek permission in addition to government permission.

This could prove difficult, though, as obtaining the necessary license requirements could be hampered. It would be best to have a collaboration between the government and the regulatory motorsport institution.

What is the cost of opening a drag strip?

Again, various factors would need to be considered. Firstly, the scope of the facility would need to be established. Given that the new age drag strips are nothing short of full-on race track type facilities, one would need to fork out a considerable amount of money to put this into action.

At a minimum, two million dollars could be a ballpark figure for a basic setup, not comprising the added features. This figure can rise very quickly if the said establishment would want to delve into a full-blown action arena. Location and existing infrastructure would determine a starting point.

One would need to consider the frequency of events held vs. running costs in terms of generating revenue. Spectator entry can account for a major part of the revenue generation. However, the facility would need to be geared towards providing a facility laden raceway, catering for and providing a top-notch experience.

Drag racing is one of the oldest forms of motorsport, if not the oldest. It is said that the first drag race was held as soon as the second car was manufactured. The standardization of the sport and the regulatory aspects are growing exponentially, hoping that this passion amongst the competitors can be safely carried out within controlled environments.

As the industry is becoming more standardized, the dedicated, purpose-built drag racing tracks follow the trend of required lengths, width, and land sizes.

Previously, drag racing comprised individual competitors taking average road-going vehicles and modifying them to compete in a race. Nowadays, however, vehicle manufacturers have identified this passion amongst their consumers, and one can have a race-prepped vehicle purchased in the form of a new car.

Keeping this in mind, it’s needless to say that the need for purpose-built drag strips is increasing. While a drag strip can be built on a square mile of land, the popularity of the sport has led to drag strips becoming fully-fledged motorsport environments that can occupy several square miles and more. As motorsport facilities continue to develop, the drag strip is rarely discounted as a resident feature for these race tracks.