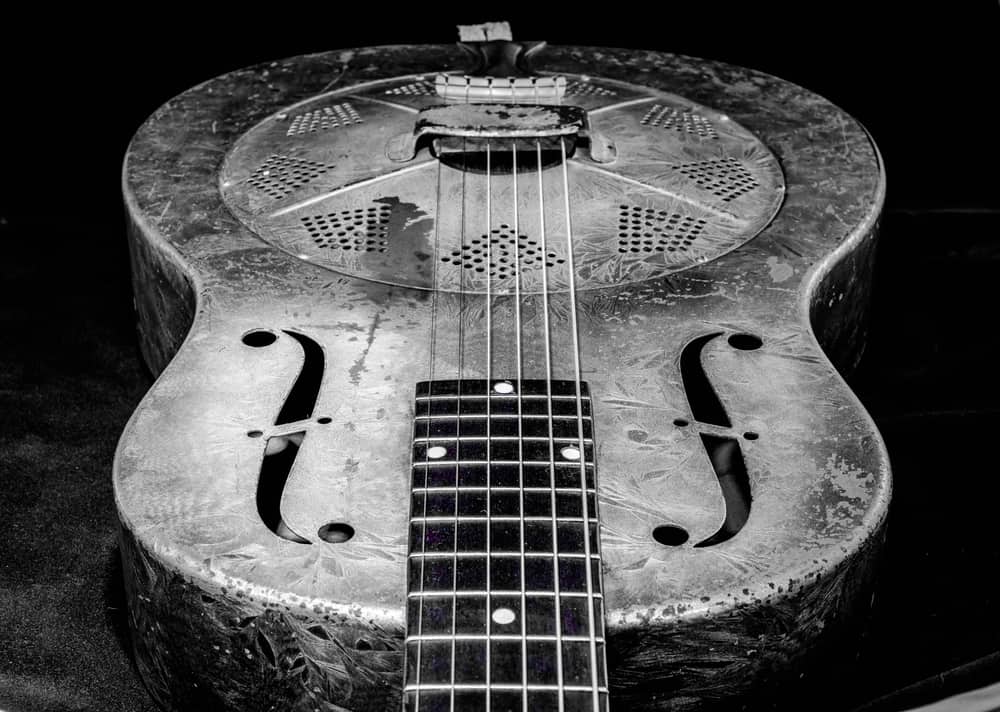 With high-quality metal alloys like stainless steel becoming more freely available, making a guitar out of metal could be more affordable and accessible to more people. It also makes sense that guitars made of metal should also be more durable and less prone to damage than traditional wooden instruments.

Guitars can be made of lightweight metals such as aluminum or steel. It’s been done since the 1920s. Some parts of the guitars are still made of wood or other materials, but the body can easily be made of metal. This is especially true of electric guitars and less common with acoustic guitars.

Guitars have been made out of metal as far back as the turn of the previous century. Though we may not even realize it, chances are we’ve all listened to and enjoyed a few songs that were played using one of these metal-made instruments since there are more than a hundred well-known musicians, across multiple genres, that play them!

Guitars have three essential parts – the body, the neck, and the head. Usually, all of these would be made of wood. Thicker and harder wood is preferred, with some electric guitars often made of one solid block. Some other parts of the guitar are made of metal, for example, screws, bridges, neck plates, washers, pot nuts, pickup spacers, etc., which are usually made using low-carbon steel.

Understanding this difference helps us to see why electric guitars are more often made of metal than acoustic guitars.

One well-known exception to this rule is Mark Knopfler from Dire Straits, whose metal-made National acoustic guitar became one of his favorite studio guitars and helped to give Dire Straits their unique guitar sound. However, we should note that this guitar has relatively low resonance; if it is played in a spacious environment without an amplifier or a microphone, it is tough to hear.

Which Metals Can Be Used To Make A Guitar?

As mentioned before, guitar bodies are still most commonly made out of wood or, in the case of electric guitars, composites. The critical thing to remember, whatever material you use, is that the more solid and heavy the material, the better the resonance will be, which leads to a fuller sound. Wood is better known for its resonance than metal or any other material is.

But the other side of this is that the heavier the instrument is, the more difficult it is to handle. So, the best-sounding guitars tend to strike a delicate balance between being heavy and solid enough to give proper resonance while still being light enough to carry and play easily.

With this in mind, the metal most commonly used to manufacture guitars is aluminum. It is light and easy to work into intricate shapes and patterns. This does not necessarily ensure the best quality sound since aluminum isn’t a very dense metal.

Kramer and Travis Bean have been manufacturing guitars with aluminum necks, or even aluminum bodies, since the 1970s. These guitars don’t necessarily have the most excellent sound, but they are definitely eye-catching on stage!

National Resophonic and Dobro were two companies that manufactured guitars with steel and bell brass bodies from the late 1920s. They used built-in cones to improve the tone and resonance of the guitars, and their guitars still had wooden fretboards. These brands were later bought by Gibson and eventually discontinued.

Ed Roman Guitars are also manufactured with aluminum bodies. They are then chrome-plated to give them a highly polished, shiny, modern look. Almost all manufacturers of metallic guitars agree, though, that steel guitars provide the best quality sound, though they also weigh more and are more challenging to play.

Perhaps the most famous metallic guitars are made by James Trussart, a French-born American musician-turned-luthier. His passion for custom and unique guitars lead to him developing his so-called “Rust-O-Matic” technique.

Trussart makes his custom guitar bodies and heads from steel alloys. The fretboards are usually still made of wood, but everything else is manufactured using steel.

Rust-O-Matic is the process whereby the steel guitar body is exposed to the elements for a few weeks, allowed to corrode, after which the body is treated to stop the corrosion and then sanded to give the appearance of years of distress. This is followed by a treatment of a clear satin coat finish.

The effect of the Rust-O-Matic technique is to make each instrument wholly unique and give it the appearance of a vintage guitar.

Apart from looking great, these instruments also have surprising sound quality. Some of the artists that use James Trussart guitars state that the guitars have “ultra-articulate attack and full-bodied sustain,” with a subtle metallic resonance that adds a unique mid-range sound to the guitars.

Between 2018 and 2019, the engineering firm Sandvik designed and built a smash-proof electric guitar that was extensively tested by Yngwie Malmsteen and then auctioned off for $25,000, which they donated to charity.

This guitar’s neck and the fretboard were milled from recycled stainless steel in one machine. This ensures a sturdy design that will not break easily. The neck and fretboard then extend into a solid steel hub that forms the heart of the guitar’s body.

The rest of the body was 3D printed in layers from Titanium. These layers were drawn from fine Titanium powder using lasers, leading to layers that are thinner and finer than human hair.

All of this metal would obviously make the guitar very heavy. To help make it slightly lighter, Sandvik used an Isotropic Lightweight Structure (ILS) that is strong, stiff, and light. The structure is made from hyper-duplex steel, a grade of steel that only Sandvik produces.

The end result is a beautiful, if unconventional-looking guitar with a deep, unique sound. Despite the ILS, it is still uncomfortably heavy but worth it for the quality of the sound it produces, according to those who tested it.

As previously mentioned, Mark Knopfler of Dire Straits is one famous guitarist who regularly plays a metallic guitar. He is far from the only one, though.

Other musicians who have been known to play metallic guitars include Keith Richards and Mick Jagger from the Rolling Stones, Billy Gibbons from ZZ Top, the one and only Bob Dylan, Metallica’s James Hetfield, Ziggy Marley, Eric Clapton, Joe Perry of Aerosmith, Paul Simon, Hans Zimmer, Eric McFadden, and Sheryl Crow.

The list goes on and on, and it includes musicians across multiple genres and musical styles from rock to blues, metal to pop.

Almost without exception, these musicians praise their metal-made guitars, mentioning that they are some of their favorite instruments; unconventional, always drawing attention on stage, but with a very unique sound that they cannot get from any other guitar.

Making guitars of metal has been done (with varying degrees of success) for more than a century. Making a great metallic guitar is challenging since you need to strike a perfect balance between solid materials that can give a full sound and metals that are light enough to play easily. Many musicians prove daily that making guitars out of metal is more than a novel idea; it’s a must-have.