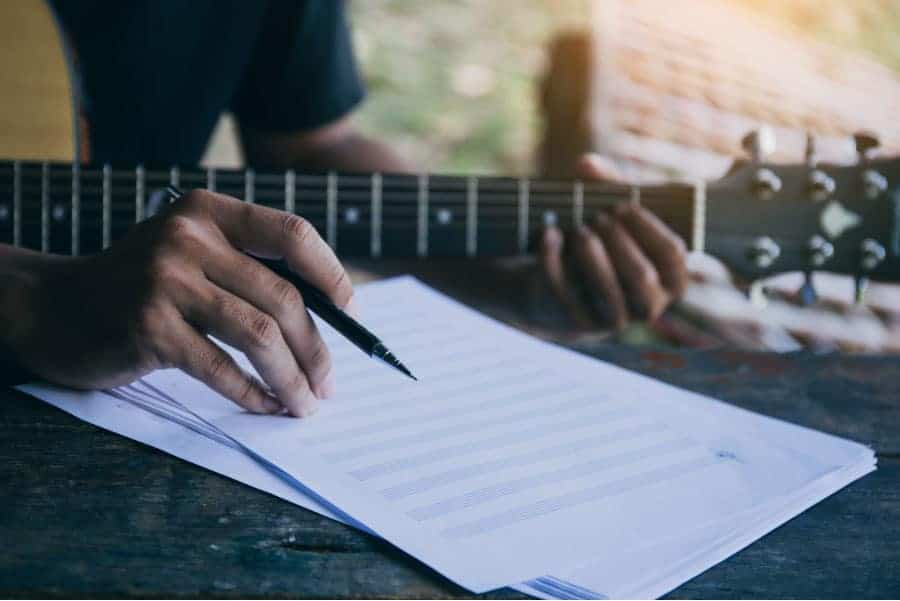 Behind every iconic singer/artist is often a team of song writers helping them put together what will hopefully be their next big chart-topping hit. There are multiple components involved in being a skilled song writer. Being a master of them all will go a long way in drawing the attention of the “big names” within the industry.

While having the ability to play an instrument is not necessary to be a song writer, it will certainly go a long way in the creative process of completing a song. Traditionally song writers are capable of playing at least one instrument, but it’s by no means a must.

Overall, having a good sense of musicality and creativity is vital in order to be a proficient song writer. Being able to play an instrument is not the be-all-and-end-all of song writing. Let’s unpack some of these components to understand more clearly the roles, responsibilities, and skills required to be a great song writer.

Do Song Writers Have To Play An Instrument?

While the short answer to this question is no, there is a little more to it than that. Song writing is a complex art that requires a wide range of skill and creativity. It would be helpful to have a look at the different components involved in song writing and the skills necessary for each of them.

The Components Of Song Writing

When beginning to approach writing a song, there are many aspects to consider.

These can include the melody, chords, rhythm (beat), genre (and style), concept (story or theme), lyrics, and arrangement – to name a few. Let us discuss each of these a little further:

Melody can be described as the notes grouped together in a song that captures your attention and are uniquely arranged in a way to make a song more identifiable. Merriam-Webster’s dictionary explains melody as:

“a sweet or agreeable succession or arrangement of sounds.”

While the melody is generally associated with a lead instrument such as piano, synthesizer, guitar, saxophone, etc., it usually begins as an idea in your mind that can be expressed through singing/humming in order for a musician to play on their instrument.

Chords can be described as the harmony that accompanies the melody. Or, in other words, the foundation that the melody will be built upon. Chords often function as the “backbone” of a song by keeping everything together. They are also usually (but not always) used to contribute to the overall rhythm of a song.

Playing an instrument is essential to being able to play chords; however, a musical ear is just as crucial in determining the best chords needed for a song.

The rhythm and beat of a song are the parts that the listener will “feel.” The Oxford Dictionary describes rhythm as:

“a strong, regular, repeated pattern of sounds or movements.”

In most cases (though it can be taught), rhythm generally comes quite naturally for some and is absolutely essential for any song writer or piece of music to have.

Rhythm is felt and understood internally before being expressed outwardly on an instrument, so a song writer can have rhythm but not necessarily know how to play an instrument like the drums.

Genres or styles of music can be easily explained as different types of music, for example, Rock, Pop, Country, Rap, to name a few.

Having a thorough understanding of different styles and genres of music is essential for a song writer, as this will influence the songs they write in order to cater effectively to their respective audience. As a silly example, you wouldn’t write a Heavy Metal song with the intent of playing it for die-hard EDM fans.

Anyone who has grown up around a radio or television will have been exposed to multiple different types of styles/genres of music and will easily be able to differentiate between the types that they’ve heard, whether they’re able to play an instrument or not.

The Concept (Story Or Theme)

The Concept or theme of a song is often seen in the song’s title and expressed in the lyrics. This is where another part of the creative mind of a song writer becomes evident. What is the song going to be about?

Great song writers are great story tellers. They need to be able to use every element of a song to communicate a message that their audience will understand or relate to.

The story or theme of a song is so important, yet an instrument does not have to be involved in this part of the process.

Lyrics can be described as musical poetry, using melodies to make the words flow with the rest of the music. The lyrics are the main element used to communicate what a song writer is trying to say or express.

Often the story behind many of our favorite songs started with someone sitting down with a pen and paper and began to write a story or message that they wanted to turn into a song. Again, the best song writers are the best story tellers, and you don’t always need an instrument to be able to tell a story.

Arranging music is the art of making sure that the different sections of a song (e.g., The intro, verse, chorus, bridge) flow well together, forming one cohesive piece of music. It also includes deciding on which instruments and sounds will be used in the song to best suit the style and genre.

The arrangement is a crucial aspect of writing a great song and requires a thorough understanding of song structures, genres, instruments, and overall musicality. Yet once again, we can see that although a good knowledge of music, in general, is essential, the skill of being able to play an instrument is not absolutely necessary.

Since there are so many aspects or contributions that form a part of music, a song writer’s role may differ from project to project, particularly when collaborating with other song writers and musicians.

Although playing an instrument isn’t absolutely necessary as a song writer (especially when collaborating with others), it can ultimately be part of their overall skill and assist them in being more proficient at what they do best.