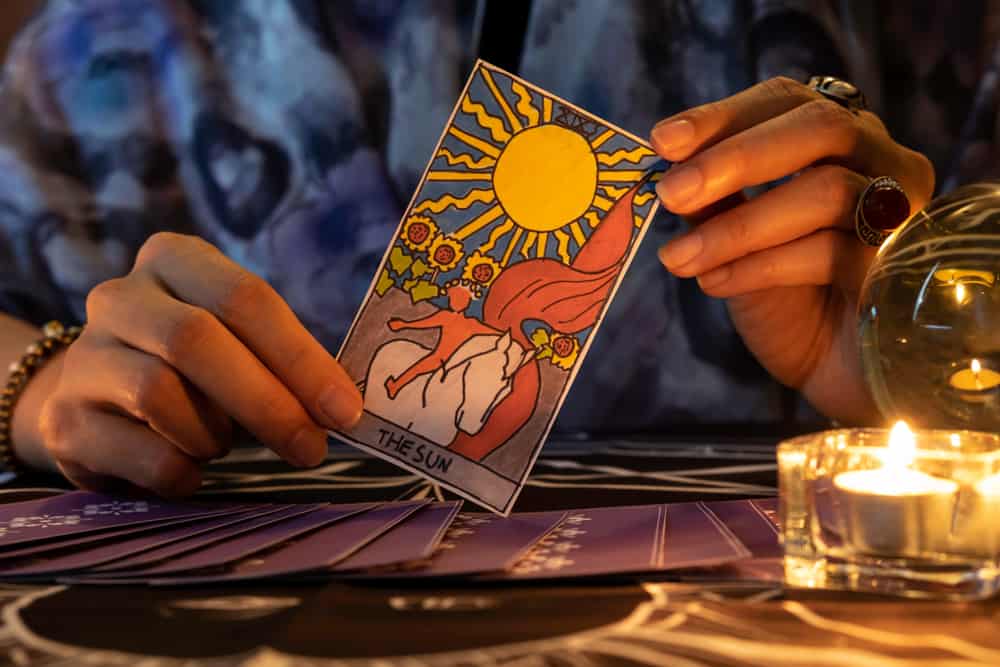 Have you ever dabbled in divination tools? I’ve spent a good couple of years taking the intuitive leap to learn all about the tarot. I have often wondered about the layout of the cards, the imagery, the wording, and the story behind the tarot. I’ve wondered why some cards are filled with beautiful imagery, affirmations and words while others are shrouded in mystery.

A true tarot deck has a clear structure; each card has a name and number. The deck artists determine the wording and themes of the deck they’re creating. The artist can creatively determine if the deck they’re designing includes words or is just filled with imagery.

What Are The Words On Tarot Cards Used For?

Tarot cards are split into the major and minor arcana. The major arcana suit has 22 cards that are the foundation for a tarot card reading. These 22 cards follow a story, starting with the fool who starts in wonder and ending with the world, representing fulfillment. Each card has an image and the respective name of the card underneath; this helps the reader identify the card and interpret the meaning.

The minor arcana has four suits. The four suits are cups, pentacles, swords, and wands. Each card in a suit is numbered, and the imagery relays the meaning of each card. Each suit in the arcana represents a different area of your life. Wands symbolize creativity and passion, swords symbolize intellect, cups symbolize emotions and pentacles symbolize career and wealth.

The words in both the major and minor arcana help the reader identify each card. Many tarot cards can be filled with detailed images and confuse the reader, especially a beginner. The wording in a true tarot deck has been around since the mid 15th century, and most modern decks follow the same structure. The names on the cards are universal, so no matter which deck you choose, the meanings remain the same.

What Are The Images On Tarot Cards Used For?

Each image on the card will match the name of the card. The King of wands, pentacles, cups, and swords will all be portrayed as an image of the King. The only varying element will be the suit each King represents. The images also hint at what the card represents.

For example, the fool is represented by a man with a dog at his side, a bag on his back, the sun shining behind him, and standing on the edge of a cliff. This card symbolizes blissful carelessness, the power of ignorance, and starting a new journey.

The world card symbolizes an ending to a cycle of life, forthcoming change, and the next cycle. This card displays imagery of a woman surrounded by a wreath with red ribbons, holding a wand in each hand. The four figures on the card represent the four corners of the universe. The cards and their symbolism paint a portrait of the highs and lows of the situation at hand. The imagery adds to the mystery behind the meaning of the cards.

The most popular tarot deck is the Raider-White. In this deck, each card follows a specific structure and contains words and numbers. Tarot cards without words have gained popularity in recent years, which has led to more flexibility in the design of each deck.

Although beautifully illustrated modern decks are gaining popularity, decks without words can be more difficult to interpret. Most people will then tend to lean towards what is familiar, that being the original tarot deck.

Can I Interpret The Meaning Of Tarot Cards Without Words?

If you have a deck without words, it cannot be easy to interpret the meaning behind each card. Sometimes the name of the deck gives you an indication of what themes could be in the deck. Other decks can cover many different life areas: love, life, finances, and self-development. The reader can interpret tarot cards without words in the following ways:

The reader can interpret the cards by using the guidebook. Each deck of cards comes with a guidebook; the guidebook helps the reader decipher the meaning behind the card.

Look at the imagery. Tarot cards are filled with symbolism and mystery. Many of the cards have deep meanings hidden in the image. Common symbols to look out for include the moon, sun, body of water, and greenery. These represent new cycles, growth, and the natural flow of life.

Are there any numbers? Numbers represent a journey. The first number would be a 0, and the start of a journey. The card number with a 0 is also the beginning of a cycle. This journey would follow until the last card in the deck. Once the cards are sorted and spread out by number, you can better identify their meaning in the story they’re depicting.

What Is The Difference Between Tarot Cards And Oracle Cards?

In recent years oracle cards have also become more popular, giving way to very creative and inspirational messages and an easier deck to handle compared to the traditional tarot. Tarot cards have a set structure and typically consist of 78 cards, while oracle card decks can vary in number and are more open to interpretation.

Oracle and tarot card readers can even use both cards to draw. Oracle cards are often themed, some of the most popular being fairies, mermaids, and dragons.

Here are the key differences between tarot cards and oracle cards:

Oracle cards are also used for positive affirmations and self-discovery. Many oracle decks have themes for self-development. Oracle cards usually focus on the overall themes in major life areas without getting very in-depth.

They come with handy guide books, which allow the oracle card reader to interpret the cards’ meanings. Oracle cards usually have words or a theme displayed on the card. Many of these are followed by a positive affirmation underneath.

“Life is an endless process of self-discovery.”

Tarot cards are among the most popular cards globally; they are collected and loved and well known for their “fortune-telling powers.” It’s a way to connect with your soul and spirit guides. Anyone can be a tarot reader. It just takes some time, a little practice, and choosing a deck that resonates with you.

Whether you’re into cats, the lunar cycles, unicorns, or just the traditional Raider-Waite style of cards, tarot can be an exciting and insightful practice to get in touch with your intuition and guide you on your journey of life.