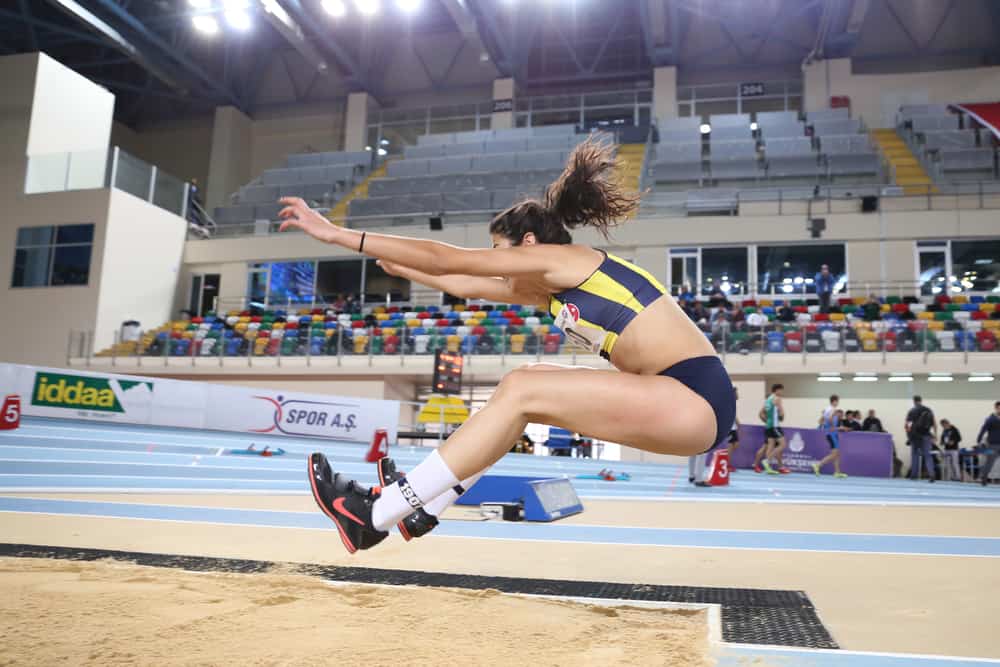 The difference between the triple jump and the long jump might not be as different as you think. It all lies in the last three bouncing steps before the horizontal jump. But the differences in those steps are huge!

Watching the jumps will explain a lot, but knowing the technique behind it makes them fascinating! Strength, speed, and coordination are the key ingredients of making the jumps.

A good triple jumper needs to combine both strength and speed to make a long-distance in their jump. The speed is gathered from the sprint and must be kept throughout the jump. Trying to control the steps before the jump is what makes the jump so difficult and requires strength.

1. The Hop is the first small jump after the sprint. Your take-off-leg leaves the board and is the same leg on which you want to land.

2. The landing is minimal and should be more of a bounce from which you make The Step. But here, you want to land on the opposite leg.

3. Again, this landing is a bounce followed by The Jump into the sandpit, landing on both of your legs.

The goal is to keep the speed throughout all three phases. That’s where the coordination comes into play. You need to control your every step making sure they are used in the best way. The aim is to come as far as possible using all three phases of the jump.

As a part of this difficult body, coordination is the posture of the athlete. It affects the length of the jump tremendously. You don’t want to lean forward too much during the jumps because that makes your distance shorter. Instead, you want to have an upright posture with a straight back not looking down at your feet. But the athlete needs to fold while landing to avoid making the jumped distance shorter.

Don’t waste your jumped effort by landing on your back. You want your feet to mark the sand and not anything else. So, go head and feet first, basically.

Like the triple jump, the speed is crucial. An athlete’s sprint needs to be consistent and quick to make a long jump. The sprint is called The Drive. The significant difference is that you can’t take any more steps after crossing the whiteboard.

That is why your last three steps leading up to the board are the most important ones. Those steps should be at your top speed because that will decide the distance. The long jump elite can reach 22 miles per hour, just like the triple jumpers.

In the long jump, the take-off is your chance to shine. One preferred leg is chosen to jump using the acquired speed and power. The aim is to gain height so that you can stay in the air longer. Having only one jump can be considered a benefit because you won’t lose as much speed as dividing the jump into phases. Only having one jump is what makes the long jump easier than the triple jump.

There are also techniques to stay in the air for as long as possible. It’s called the flight. You can choose between different ones, but the most common ones are the sail, the hang, and the hitch-kick. It’s basically different techniques on how and when to bring your take-off-leg forward to your opposite kicked-out-leg while folding in preparation for the landing.

The landing and posture are like in the triple jump. You want to use your arms to swing yourself up and end folded just like before. Then athletes fall on their sides or forward to save those jumped inches because every inch counts.

Which Jump Has The Longest Distance?

Well, it depends on how you like to measure. In terms of distance reached starting from the board, your winner would be the triple jump. The world record in the triple jump for men reached 60 ft, and for women, it’s 50,1 ft. That’s like jumping over a megalodon shark! Well, including the three steps of jumping on the shark as well. Someone should break the record soon because they haven’t changed since the 1995 World Cup in Gothenburg.

Which Jump is More Dangerous?

It’s easy to get injured in any sport, but with the jumps, your injury risks mostly depend on yourself. The ways of getting hurt are the same in both jumps. It happens in the take-off or the landing. You have the risk of fracturing bones, tearing muscles, dislocations, spraining your ankle, hurting your knees, or bruising. But all these injuries can be avoided by proper training of technique and strength. Just stay healthy and listen to your coach.

But because triple jumping has more jumping and landing phases, the risks of getting an injured increase. That’s why learning coordination is so important in that specific jump. And once learned and executed with focus, the jump shouldn’t be a lot more dangerous.

Which Jump am I Best Suited for?

The desired body type is remarkably similar in both jumps. It’s not enough to be tall to have an advantage. Being tall helps you stretch your legs further, which helps you get those extra inches. But with that height also comes more weight which can slow you down in the sprint. The trick is to be both tall and fast in the sprint. An average height is 5,9-6,2 ft. and weighing around 154-180 lbs. for men in the World Cup.

But having the body for these jumps doesn’t make you suited for them. There’s more to it than just looking good. It’s crucial to have the coordination for the triple jump to win inches and not hurt yourself.

Body control comes from practicing, but I would also say that some people have it come more naturally than others. If you feel like the long jump is too easy or simple, you should try the triple jump out. Try to get those steps right! I’m sure it’s harder than it looks.

I would personally say that the best way to figure out what jumpsuits you the best is to try them both. Ask yourself the following questions:

The triple jump and the long jump are different in the last three steps before landing in the sand. They are either long with a difficult technique or short with high speed. These are the steps that decide the distance of the jump. And as we have learned, the jumps’ distances are only different depending on how it is measured.

The similarities are between the jumps and are found in the sprint, the flight, and the sand’s final landing. But the skills needed for a successful jump are a little different. Speed, strength, and body control are crucial to the triple jump, while speed and power are key ingredients of the long jump.

Knowing these differences in technique will help you enjoy the sport so much more. And it even helps you to decide what to try out yourself. Jumping is the human equivalent of flying, if I can say so myself. The triple jump and long jump are simply different ways of trying to stay in the air for as long as you can. Again, every inch counts.