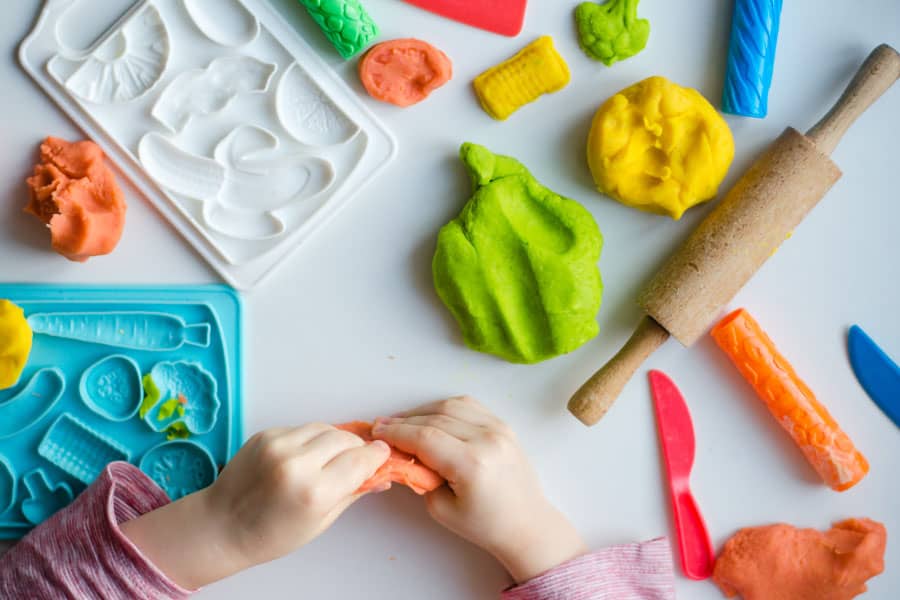 Playdough was first invented in the 1930s and was originally sold and marketed as a wallpaper cleaner. In the 1950s, it was then marketed towards schools as a non-toxic arts and craft product and then later sold to families to enjoy at home. In the past 65 years since its creation, it is estimated that more than two billion tubs of playdough have been sold, and countless batches have been made at home for families and children to enjoy.

According to the company website and representative, Play-Doh is vegan. They do not test any of their products on animals, and there are no animal bi-products used in Play-Doh. Whether or not your particular playdough is vegan is entirely dependent on the type or brand of playdough you have, whether it is homemade or store-bought, and the ingredients used to make it.

Most playdough recipes were originally vegan because they were made with a basic recipe of only water, salt, and flour.

Over the years, things have changed. Nowadays, many modern types of playdough have many more ingredients, some that may even contain animal products.

For playdough to be considered vegan, there must be no animal products in the ingredients and no products that have been tested on animals.

There are many different types of playdough available on the market today, but for more creative playdough, you may need to make it at home with specialized ingredients.

Why Is Playdough So Popular?

Playdough is an amazing tool for children in so many ways.

So, now that we have established why playdough is wonderful for a developing child, another question must be answered: which type of playdough is the best?

The answer to this playdough question entirely depends on the age of your child and your family’s lifestyle. If you are in a vegan household, then choosing vegan playdough may be the best choice. However, it comes down to more than just your lifestyle.

What are the pros and cons of vegan and non-vegan playdough?

So, which playdough is the best playdough? Overall vegan playdough is probably better from all perspectives – it is safe for kids and toddlers of all ages (always under supervision, just because it’s not harmful does not mean you do not need to supervise their playtime), it is easy to make, it is inexpensive to make, and it helps in their development.

There are many different types of homemade playdough; each of them is different and made from different recipes.

Although most playdough recipes have the same basic ingredients, some people have put their own creative spin on their recipes to make their playdough, unlike any others.

Here are some of the best homemade playdough recipes that the world has to offer:

Bubble dough is a type of playdough that is almost a combination of slime and playdough – super cool, right?

The ingredients for this playdough are:

This type of playdough can be completely vegan, depending on the type of shampoo you are using. As long as you use a vegan-friendly shampoo, this one goes on the ‘vegan playdough’ list.

Glitter glue salt playdough is more similar to regular playdough in texture; however, it is slightly different because of the glitter glue used in it.

The ingredients used are:

This playdough is not vegan due to the glitter glue that is used in it.

For color and texture, crayons are melted and added into this recipe – crazy, right? But very creative.

The ingredients used are:

Even though this is a great playdough recipe, not only is it not vegan, it is not even considered vegetarian.

Crayons contain rendered cow fat, which is what gives them that distinctive “crayon smell.”

Now for a fun and yummy playdough.

Although a lot of playdough can be considered edible, this one is tasty as well!

However, because of the Marshmallows in this recipe, it is also not vegan. Marshmallows contain gelatin, an ingredient derived from collagen taken from animal parts.

Vegan or not, playdough is a great toy for kids and can be used in many creative and educational ways.

Although not all playdough is vegan, vegan playdough is absolutely wonderful and could possibly be the best playdough you can buy or make at home.

Like that old saying goes: “If it isn’t broken, don’t fix it.”

Vegan playdough was made perfect in the 1950s, and even though you can add many things to playdough, vegan playdough is still perfect now as it was then.

There are many different recipes for playdough out there. Take the time to experiment and find the recipe that you like best.