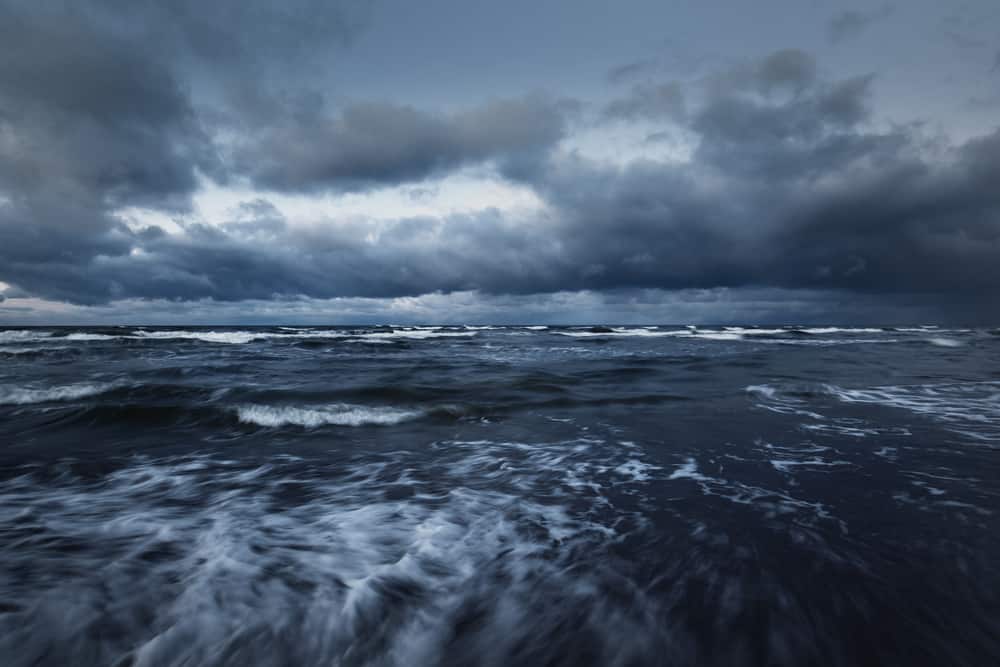 Have you ever been scuba diving while it’s raining? The rain alone makes visibility in the water dark and gloomy, which can be quite intimidating, especially to beginner divers. So, let’s see if scuba diving in thunderstorms is a good idea?

It is not recommended to scuba dive during thunderstorms due to the obvious wellbeing of the divers, which include but are not limited to: getting struck by lightning on the surface, impaired visibility due to rain, lack of essential equipment such as oxygen, loss of direction, and panic that could cause poor decision making.

There are some magnificent diving spots in the ocean. I’m sure we all agree on that! However, some factors come into play, especially thunderstorms, that make you think twice about that scheduled scuba diving trip. So, let’s delve into more detail about why scuba diving in a thunderstorm isn’t a good idea.

Why You Shouldn’t Scuba Dive in Thunderstorms

Diving in a thunderstorm is not recommended for a few simple and obvious reasons. Once diving beneath the surface, you are at a slight risk; you can control where or what you do provide you with the right equipment and sufficient oxygen. Once you ascend to the surface, your risk increases drastically. It is unknown how close the lightning is until you reach the surface, so do not attempt to make any judgments while submerged underwater.

Safety being the key reason, among others, visibility will drastically decrease as the storm gets worse. Some divers also risk panic, which could impair decision-making. It is important to dive within your limits. Cancel a scheduled dive or location if you feel the conditions are unsafe, no matter how tempting the situation may be.

It is expected to have more strikes nearer to land since that’s where the most heat and storms build-up, specifically in the summer. In winter, there are significantly fewer people in the water.

Lightning and thunder can occur at a similar time. The reason why we see the flash first is that light travels faster than sound.

Saltwater is also a better conductor, so the surface electrical discharge will spread further than in freshwater.

This is why is it not recommended to scuba dive in a thunderstorm.

How dangerous is lightning?

Lightning does not strike in the same place twice. A phrase I’m sure most people have heard or spoken of themselves. Well, the reality is, it does and can hit the same spot twice.

Lightning strikes are extremely dangerous; they can be deadly; this does not mean the lightning directly hits you. The majority of injuries, both serious and minor, are caused by the impact of the strike.

It is not clear what is involved in the formation leaving room for some speculation; however, there are well-known physical elements that need to be present for it to occur. The key elements that must be present are cold air and warm air.

How does lightening occur?

Lightning is a natural occurrence of sudden electrostatic release whereby two electrically charged regions in the atmosphere equalize. It is not yet known what the distance is of each strike; however, it can contain 100 million volts of electricity and reach temperatures five times hotter than the sun’s surface, so I would not take any chances.

The electrostatic discharge can occur in various ways; between clouds, within a cloud, or between the ground and a cloud, also known as the cloud-to-ground bolt.

Can You Get Struck by Lightning Underwater?

The probabilities of being struck by lightning in a given year are fewer than 1 in a million. Certain aspects can put you in greater jeopardy. Individuals who work outside or engage in recreational activities are most often struck by lightning. Regional and seasonal variances can also affect your risk of being injured by lightning.

The good news is that lightning doesn’t strike the ocean as often as land; however, when it does, it acts as a conductor spreading across the surface of the water, hitting boats and electrocuting fish.

The electric current needs to pass through your body; however, the conducting seawater will hold a good amount around your body. Most of the electrical discharge spreads horizontally than vertically. This is why you should never float or swim near the surface. You are at much greater risk if you are protruding above the water or in a boat.

What Should You Do If A Thunderstorm Occurs While Diving?

Get out of the water if there are signs of thunder or lightning! Get off the shore and find shelter in a building or your car. If you are on the boat, it is recommended to huddle up into a small ball instead of lying flat on the surface.

Lightning conductors can be fitted into boats which are highly recommended, which direct the electrical charge into the sea while avoiding their most vulnerable areas such as passenger rooms or equipment areas.

Do not use any electronic equipment while in an exposed area or at sea.

What Precautions Should A Diver Take If a storm is on the way?

There are two ways to minimize the risk of getting hit by lightning – get out and find some shelter or swim deeper.

The 30/30 rule is recommended to prevent the risk involved in a lightning strike during a thunderstorm that estimates when it is time to look for protection and when the danger is believed to be over.

It has been recommended to suspend activities for at least thirty minutes after the last thunder claps present themselves. You can use the 30-30 rule – after seeing lightning count to 30 if thunder occurs before 30 counts, this indicates that it is closer than 10km, and it is advised to go indoors or to the nearest safe shelter.

However, due to the analysis of the victims of lightning strikes its apparent that the strike is either before or after the thunderstorm has taken place. It has never been documented during the thunderstorm hence making this rule unreliable.

It is important to note that all general safety recommendations are adhered to. Only reliable systems based on advanced technology and based on scientific sources are to be trusted.

Always consult a qualified diver if hesitant about diving conditions.

If you are concerned about a scheduled dive’s weather report, postpone until stable weather conditions are confirmed. If a thunderstorm unexpectedly presents itself while you are out at sea, do not continue with the dive.

While already underwater and lightning strikes, either dive deeper or find safety in the boat or shore. Do not underestimate the distance at which lightning is from underwater.