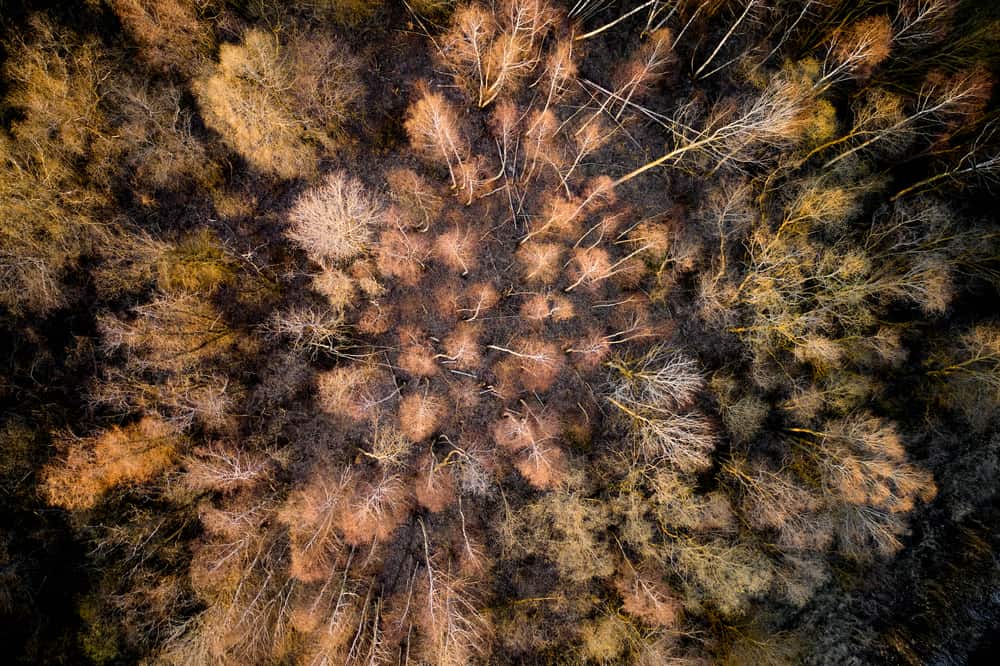 It may sound weird, but trees are living, breathing, and reproducing entities, so does this mean they have a gender? Do you know if the tree in your garden is a male or female?

Unlike animals, however, it isn’t always so straightforward. A single tree can also have both genders. How so? It all depends on the flowers or cones of the tree. In fact, there are three more sexual systems that occur among trees – monoecious, cosexual, and polygamous.

Trees can have two genders

The function of the male and female genders in trees is the same as with animals, where the males produce sperm (in pollen), and the females produce eggs. Female flowers contain ovaries which produce embryos contained inside seeds, whilst the male flowers produce pollen which fertilizes the female eggs. Thus, fruit is produced from female flowers only. Pollen is usually transferred via wind, birds, or insects.

Why do trees have these different reproductive systems? It generally comes down to genetic advantage. Some reproductive techniques such as dioecious reproduction allow for genetic exchange between different trees of the same species. Birds or insects may carry the pollen from a male tree a few miles away to fertilize a female flower in your garden which will, in turn, produce seeds with a mixed genetic makeup from the two trees. This helps with disease resistance and makes the gene pool stronger.

So how do trees reproduce? Well, male and female parts develop once the tree reaches sexual maturity. A flower blooms, and the male parts produce pollen which holds the male genetics in sperm. Meanwhile, female genetics are provided through the production of eggs from their ovaries. The flowers don’t just look pretty for our benefit; they also give off pheromones that attract birds and insects to them.

The birds and the bees collect pollen as they visit the male flowers and then fly off to a female flower and brush the pollen off onto the female organs. Successful fertilization of an egg leads to a viable embryo grown inside a seed, which is usually surrounded by sweet and juicy fruit to be picked up by animals and scattered far and wide in their waste, thus expanding the range and distribution of the tree species.

Flowers and cones are the reproductive organs of trees

We know what a flower is, but what’s all this about cones? Simply put, trees can be flowering or non-flowering. Flowering plants are called angiosperms, whilst non-flowering plants are called gymnosperms. If gymnosperms do not flower, how do they reproduce? They produce cones instead of flowers. The cones also contain male or female organs, sometimes both. You’re probably most familiar with pinecones, which are the seed producers of a pine tree, a gymnosperm. These pinecones contain pine nuts which are the seeds of the pine tree, produced with an egg inside them. Gymnosperms are mostly monoecious, but it is also possible for a single cone to contain both male and female parts.

Here are a few differences between gymnosperms and angiosperms:

So, all the flowers in your garden are angiosperms, and the cone-producing plantation of pine trees down the road are gymnosperms.

How can you find out the gender of your tree?

Now that you can identify your tree as a gymnosperm or an angiosperm, what about its gender? Finding out the gender of the tree in your garden may not be that easy. It is not always just a matter of looking and telling. Firstly, you’ll need to wait for spring when the tree blooms, but it will only do this if it’s reached sexual maturity.

Furthermore, some tree species may take a while to reach sexual maturity, and the time taken varies hugely between species. In some trees, it can take up to fifty years! The Guinness World Record for the slowest tree to bloom is held by a giant bromeliad from the Bolivian mountains, which takes between 80-150 years to reach sexual maturity. You may not want to plant this if you’re waiting for the flowers!

To identify your tree’s gender, you may need to revisit high-school biology. To identify a male flower, look for a pollen-laden stamen. The female parts won’t produce pollen but look for their pistils which produce the eggs.

Is it important to know the gender of your trees?

Well, seeing as most trees are cosexual and will have both genders, you usually don’t have to worry about sexing your tree. But in some cases, it can be very important to know. Interestingly, cannabis growers may be very familiar with plant gender because only female plants will produce the flower buds used in the cultivation of it.

Here are a few reasons why you might want to find out the gender of your tree:

Can trees change their gender?

Just when you started to think they were complex enough with their four reproductive systems, it gets worse. If there is an unequal ratio of male to female trees in an area, some trees can change their gender to balance the ratio. A sex change mostly occurs from male to female and not the other way round. Seems weird? The reason is logical – if a male tree is put under stress and begins to deteriorate, it will change its gender in a final attempt to spread its seed before it dies. This ensures the persistence of the species.

A gender change can occur from one season to the next. Sometimes only a part of the tree changes its gender whilst the rest of the tree keeps the same sex. Sometimes trees (mostly angiosperms) produce male flowers, begin with, and start producing female flowers after some time, and other species (gymnosperms) do it the other way round.

Whether you’re a botanist, nursery owner, or hobbyist gardener, determining the gender of the trees around you might be useful. Whilst you’re at it, how about setting up a beehive to make sure these pollinators can do their job to keep your trees flowering every season? Finding out your tree’s gender may help you crack down on a pollen allergy or prevent the messy fruit stains on your car. You may be able to get the perfect blossoms in years to come or finally help that unproductive date palm in your driveway to start fruiting! There are many uses in knowing the gender of a tree, but you might have to wait a while to find out!